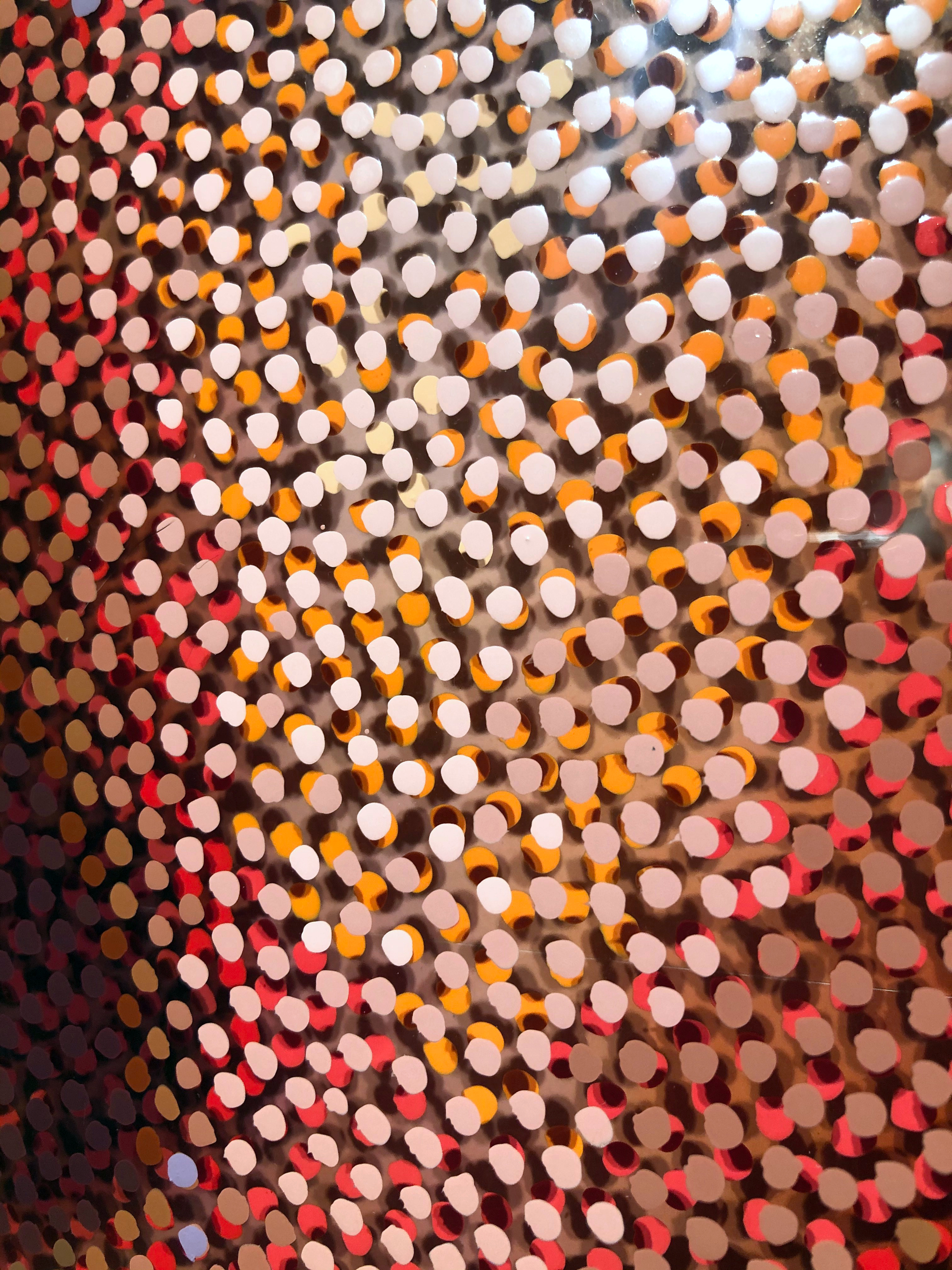 The Pointillist painters were interested in using dots to visually mix colors. They used dots of different colors to simulate blended colors. For example, if dots of two colors are placed next to each other, from a distance they look like a third distinctive color. Here is a detail from Circus Sideshow (Parade de Cirque) (1889) by Pointillist painter Georges Seurat showing pointillism and color theory. 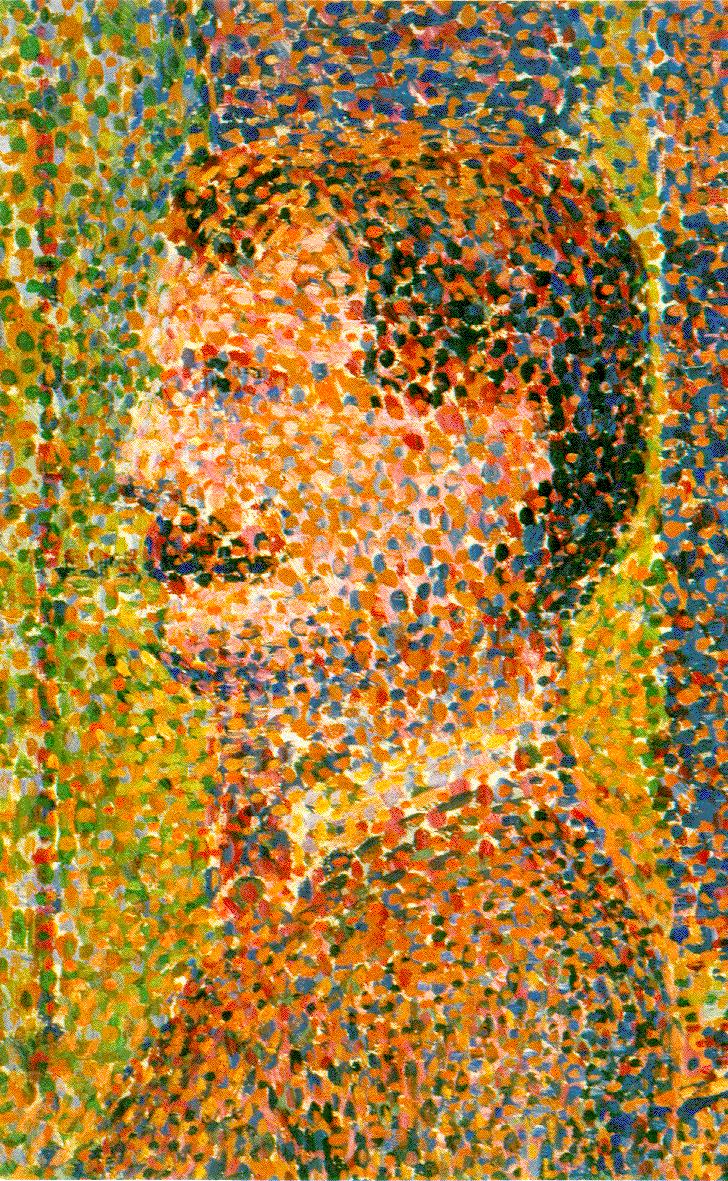 I began using dots because I am creating three dimensional paintings on many layers of clear plexiglass. I need a technique to be able to see through one layer to the next layer, and to the next. The dots if spaced correctly only take up maybe 40% to 60% of an images surface area at most. This lets the viewer look through each layer to see the layer below it. 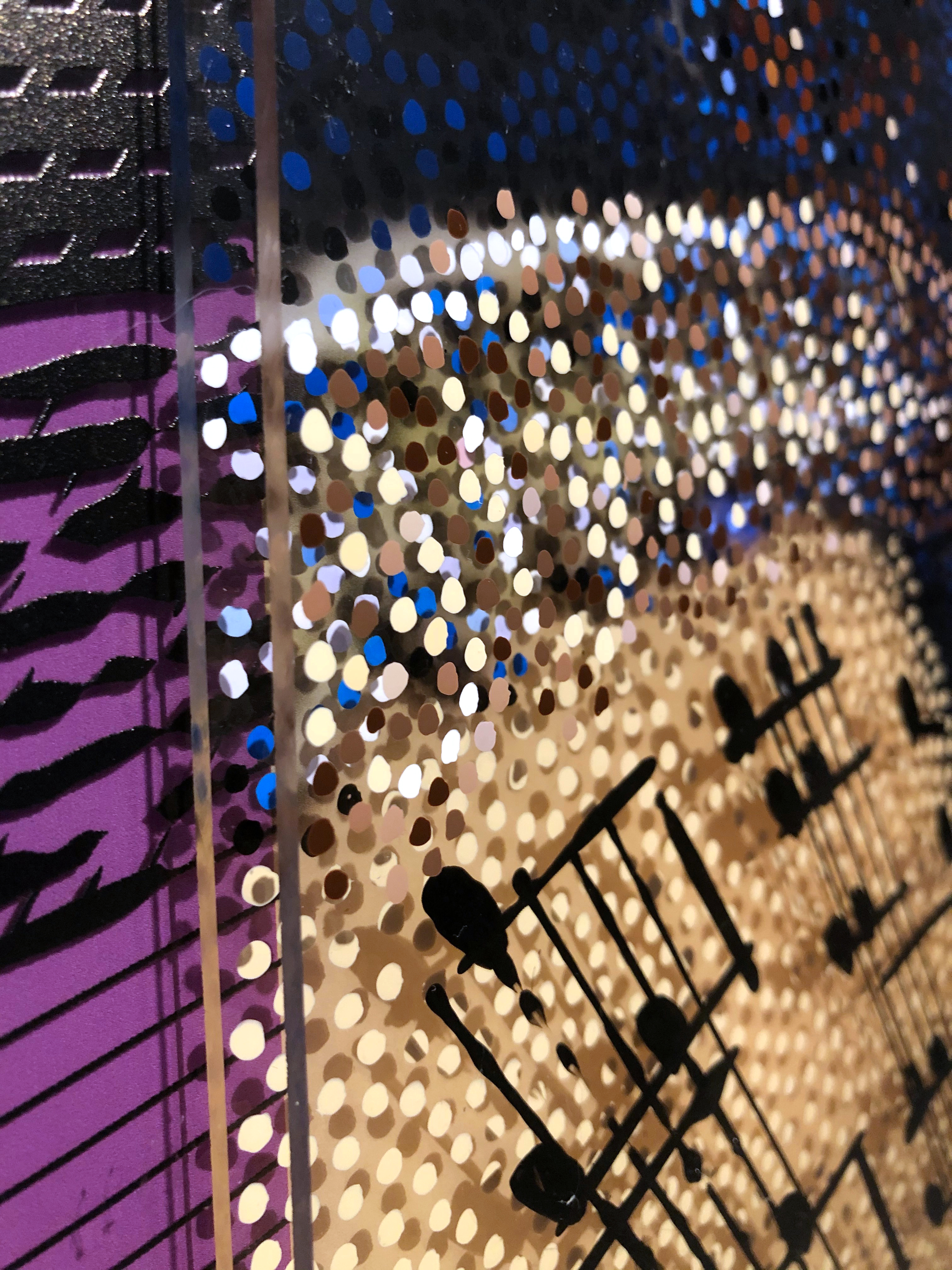 When I first started using dots I was using them more in the manor of stippling. Stippling allows the artist to vary the density of shading very subtly to depict curved or irregular surfaces. But it is not generally used to render complex color schemes. A popular artist using stippeling today is Kevin Sprouls. He did stippled and hatched portraits known as hedcuts for The Wall Street Journal. 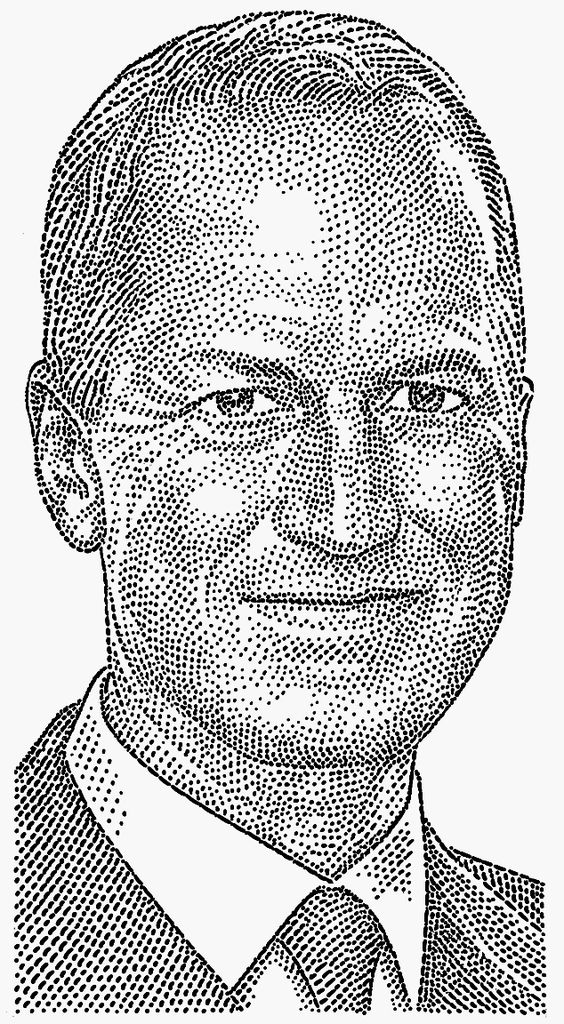 Here is an example of one of my paintings that is not technically Pointillism, but is monochromatic stippling. 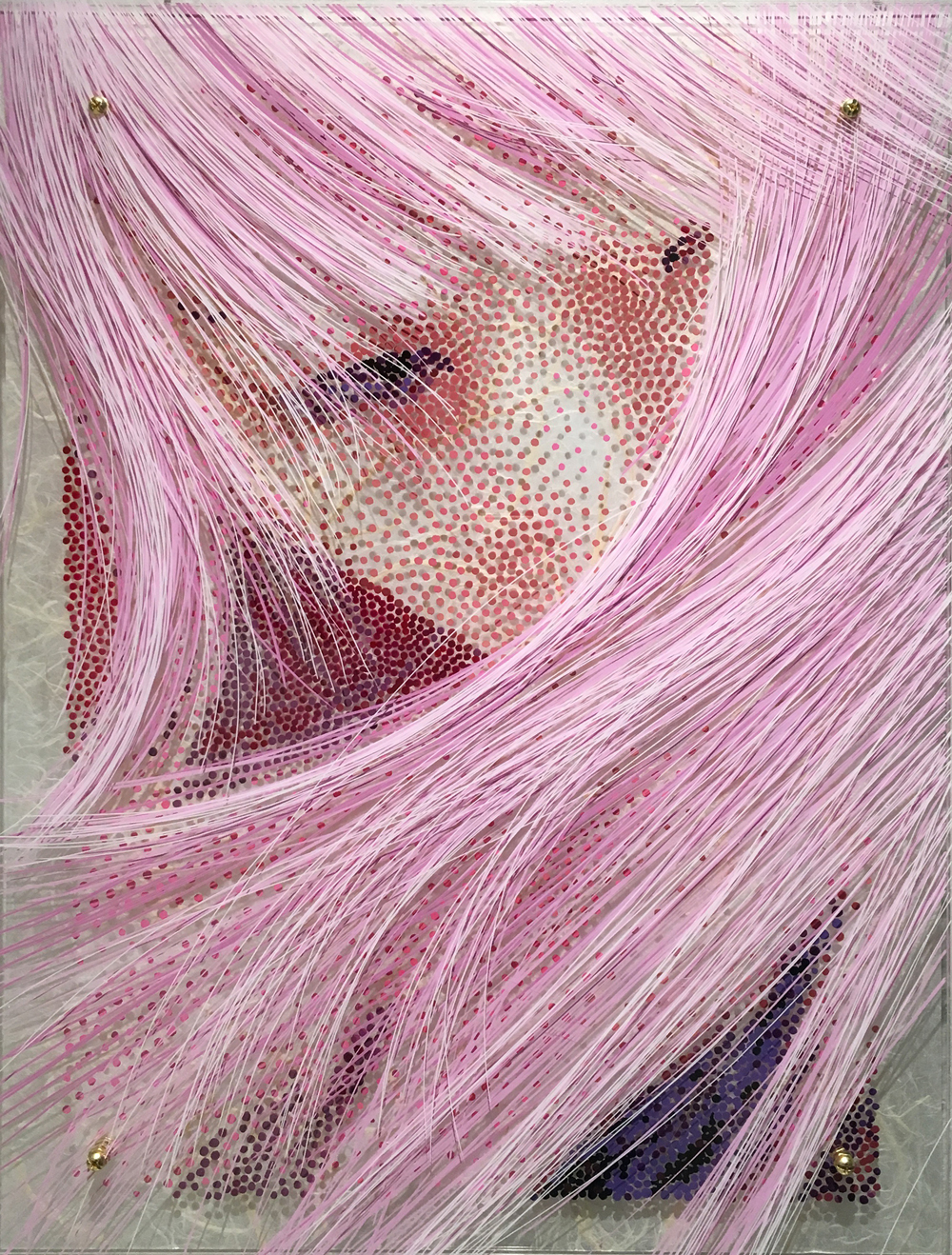 As my paintings have become more complex I wanted to add more complexity to the colors in my paintings, and evolving into a Neo-Pointillist painter has enabled me to achieve this. I began this evolution by shifting the color pallet of the dots from one layer to the next. One layer being cooler or warmer then the next. I also now shift the color saturation as well. This creates a very complex color pallet that changes as the viewer moves closer or further away from the painting.

See a high reseloution version of this image here.

Below is a brief history of Pointillism, some of it's artists and how this artist movement came into being.

In 1839 French chemist Michel Eugène Chevreul as director of the dye works at the Gobelins Manufactory in Paris wrote "The Principles of Harmony and Contrast of Colors". The concepts in his book transformed color theory and lead to future art movements including Pointillism. 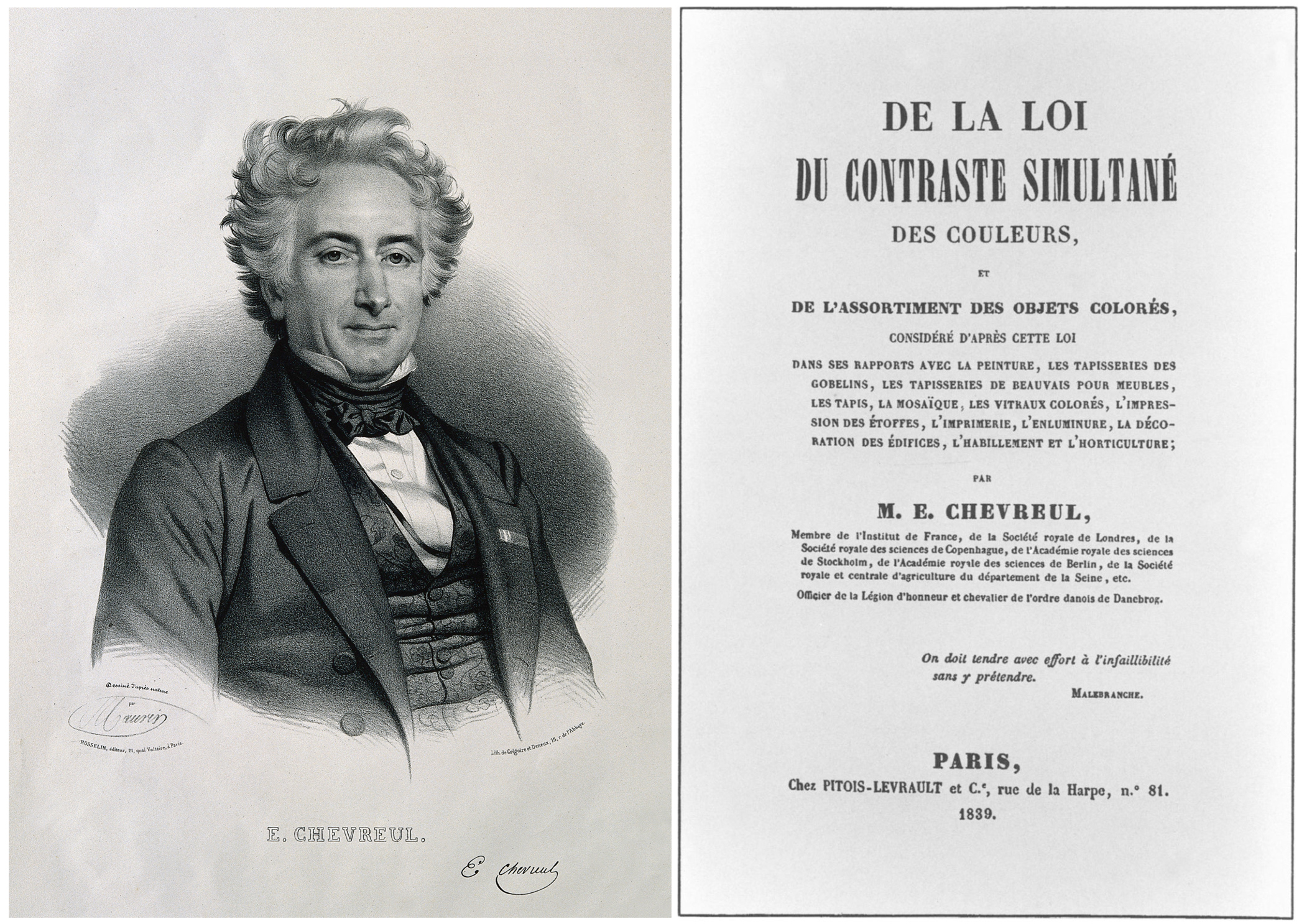 Danish-French Impressionist and Neo-Impressionist painter Camille Pissarro wrote a letter to Durand-Ruel, his art dealer in 1885 that he has met French Post-Impressionist artist Georges Seurat and came to some important conclusions. "...Seurat, an artist of great worth, was the first to have the idea of applying scientific theory, after having studied it fully. I have only followed, as have my other colleagues, Signac and Dubois-Pillet, the example given by Seurat. Seek for the modern synthesis with scientifically based means which will be founded on the theory of colors discovered by M. Chevreul and in accordance with the experiments of Maxwell and the measurements of N. O. Rood."

So what did Chevreul come up with that was such a big deal?

Chevreul was responsible for quality control, particularly color quality control in the dying of fibers to create accurate color for tapestries at des Gobelinsis, a tapestry factory located in Paris.

Chevreul observed that a single fiber would look different in different parts of the tapestry. He thought, at first, that his dyes had faded or were somehow defective. The color changes were not caused by faulty pigments, but by the influence of neighboring colour tones.

Chevreul's observations, publications, and public lectures that he gave at the Gobelins tapestry factory until the 1850s influnced painters like Georges Seurat and Paul Signac to develop Pointillism in 1886, branching from Impressionism. These Pointillist painters were interested in using dots or small brushstrokes to visually mix colors to produce a great degree of luminosity and brilliance of color. They used dots or small brushstrokes of different colors to simulate blended colors. For example, if dots of two colors are placed next to each other, from a distance they look like a third distinctive color. 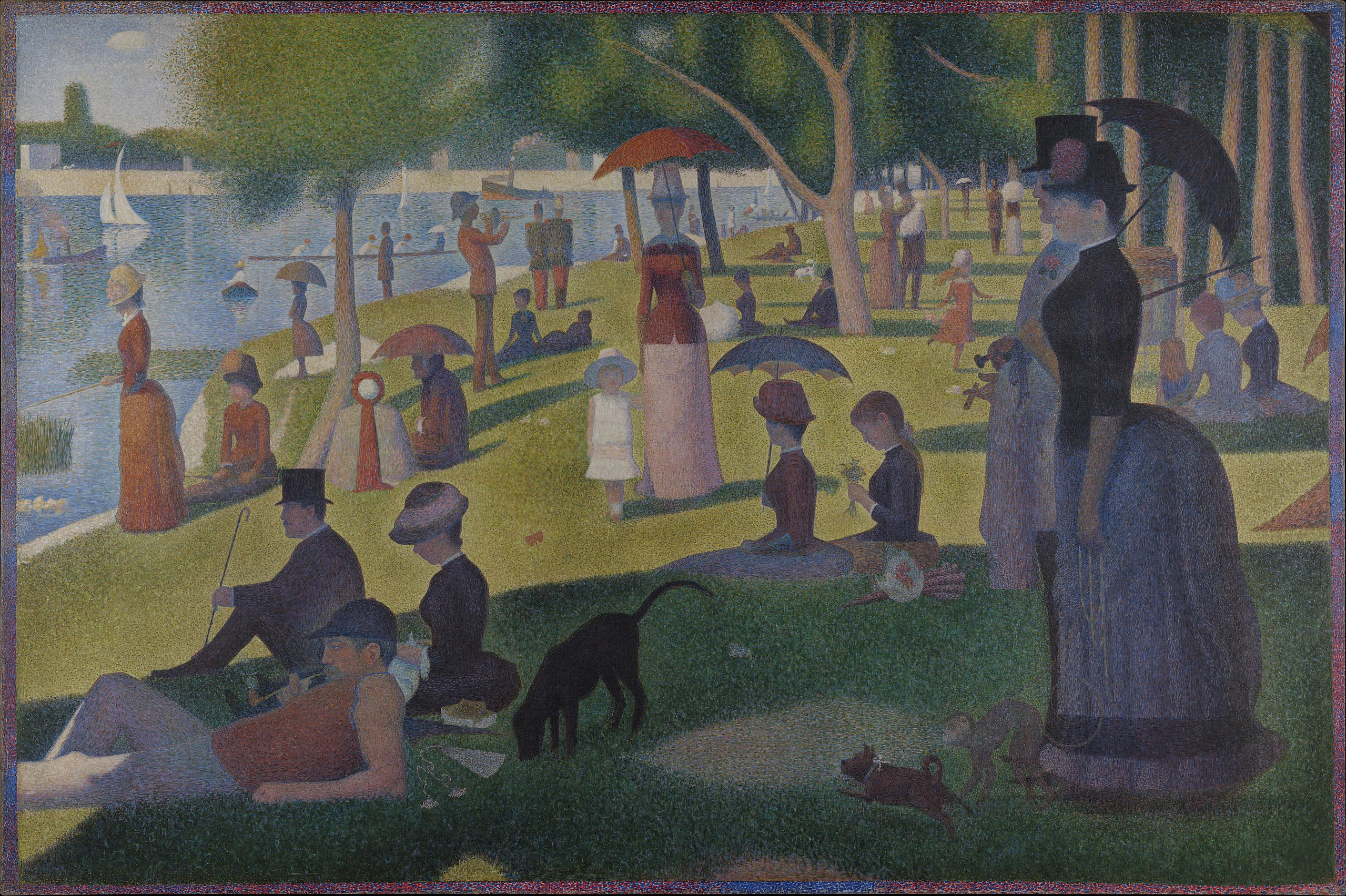 Chevreul's theories behind Pointillism were also the precursor to the modern day 4 color process printing used to reproduce color photographs in magazines and newspapers today. In 1906, the Eagle Printing Ink Company incorporated the four-color wet process inks for the first time. That technique uses dots of only four colors (CMYK), Cyan, Magenta, Yellow and Black to produce thousands of colors. 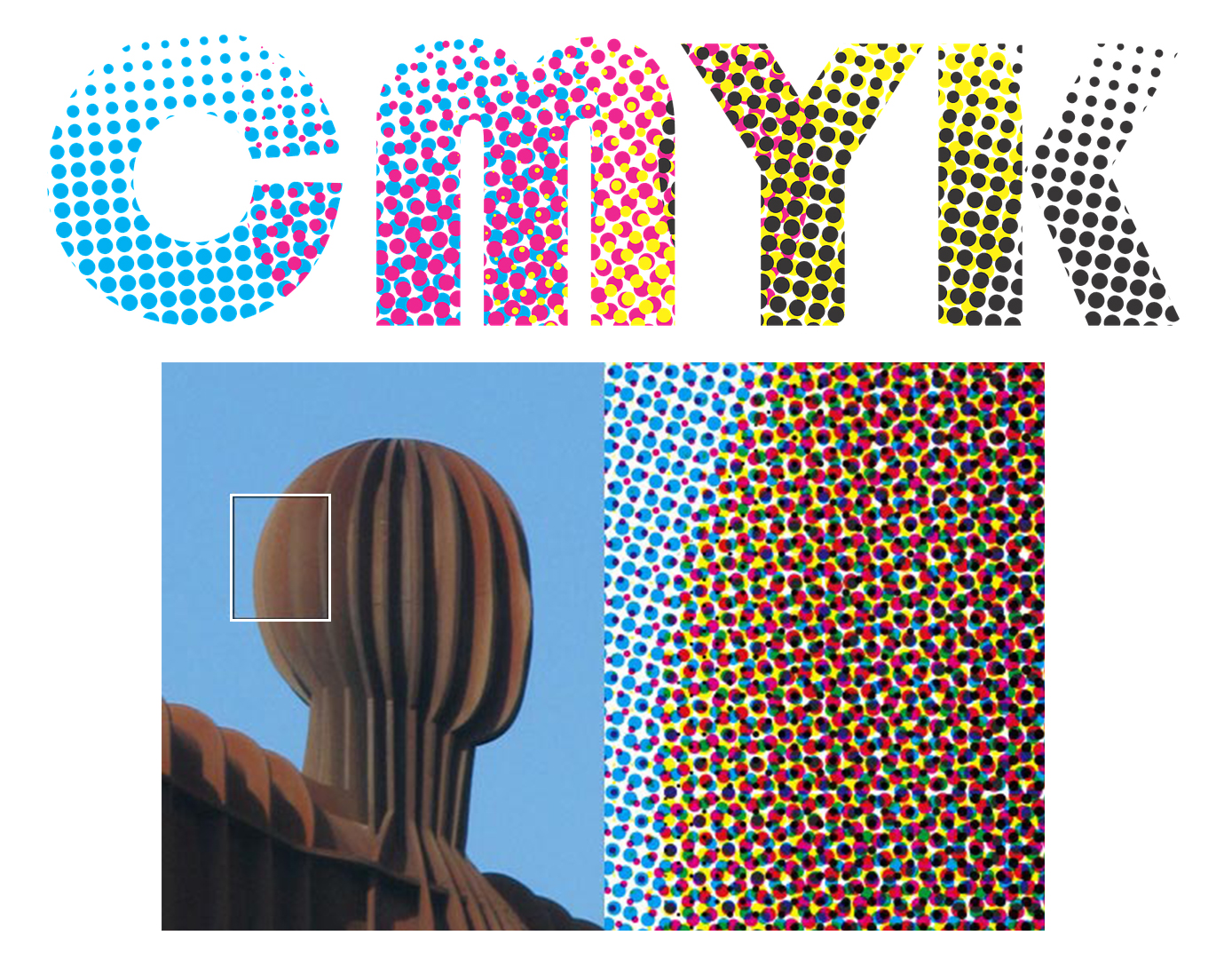 Here is a portrait I did of my mother using that 4 color process technique. Each sheet of clear plexiglass has one of the 4 process colors. All layered on top of each other. 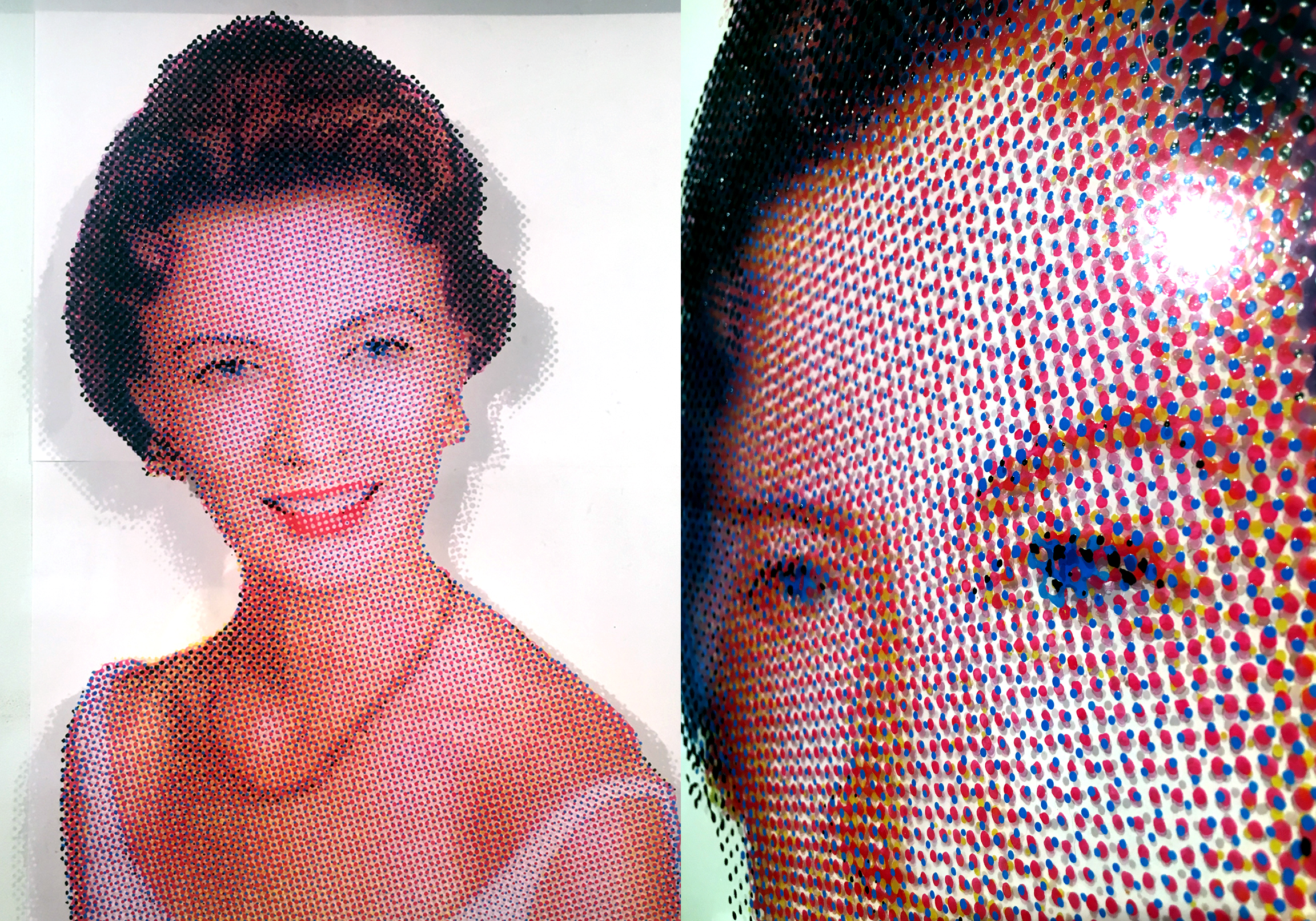 My artistic journey is not done as I'm now also incorporating some of the PopArt and OpArt techniques of the 1960's. I'm looking forward to writing about some of the artists that have had the greatest influnces on me. You can see my examples of my "Three Dimensional Kinetic Pointillism" paintings here.

Below are some links for more information about the subjects in this blog post.